Each year on Lag B’omer, over 250,000 people converge on the sleepy town of Meron in northern Israel. What is it that attracts so many people to Meron? What does Meron have to offer? What’s its history? Let’s take a look.

Meron is in the far north of Israel, near the more well-known city of Safed. It has the status of a moshav – a private cooperative village. There are many moshavim sprinkled across the country.

Meron, originally known as Merom, was first mentioned in the Bible as the site of Joshua’s victory over the Canaanite kings (Joshua, Chapter 11). It is also mentioned in the Talmud as a village in which sheep were reared and olive oil was produced.

Meron is most famous as home to the tomb of Rabbi Shimon Bar Yochai, believed to be the author of the mystical Zohar. Lag b’Omer, the 33rd day of the Omer count between Passover and Shavuot, is the day that Rabbi Shimon bar Yochai died. As such, the day is traditionally devoted to celebrating his life and accomplishments.

During the festivities attended by Jews of every religious and political persuasion, bonfires are lit, music is blaring and dancing is everywhere. It is also customary to give a boy his first haircut near the tomb of Rabbi Shimon bar Yochai. With torches and feasting (yes, free food for 250,000 people…you’ve just got to see it to believe it!), Lag b’Omer is truly a festive celebration in Meron.

Rabbi Shimon bar Yochai is not the only great sage buried in Meron. When medieval Jewish traveler Benjamin of Tudela visited Meron in the 12th century, he reported on the tradition that Meron is also the burial place of the great sages Hillel and Shammai, who were two leading sages of the first century BCE, and “other rabbis.” So, too, on a visit to Meron in 1210, Samuel ben Samson, a French rabbi, reported visiting the tombs of Rabbi Shimon Bar Yochai and his son Rabbi Elazar.

From the 13th century onward, Meron had established itself as a site of pilgrimage for Jews in Palestine. The 14th-century Arab geographer Al-Dimashqi makes mention of some kind of pilgrimage near a “well-known cave” to celebrate some kind of festival. This cave, of course, was the tomb of Rabbi Shimon bar Yochai, and the festival was Lag b’Omer. 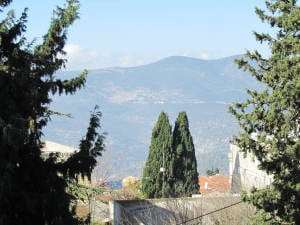 In 1596, Meron was cited as being a “large” village of 715 people who were iraising goats and bees and pressing grapes and olives. Meron suffered only relatively minor damage in the Galilee earthquake of 1837. It was reported that during the earthquake, the walls of the tombs of Rabbi Shimon bar Yochai and Rabbi Elazar were shaken but did not collapse. Meron was home to both Jews and Arabs until as late as 1931, when the last Arabs left during Israel’s War of Independence.

A number of European travelers visited Meron during the 19th century. For example, Edward Robinson, who visited Meron during his travels in Palestine and Syria, wrote that Meron was “a very old looking village situated on a ledge of bristling rocks near the foot of the mountain. The ascent is by a very steep and ancient road.” The tombs of Rabbi Shimon bar Yochai, his son rabbi Elazar and those of Hillel and Shammai are identified by Robinson as lying within a “khan-like courtyard underneath low-domed structures that were usually kept closed with the keys held in Safed.”

Christian mystic Laurence Oliphant also visited Meron sometime in the latter half of the 19th century. He was guided by a rabbi who was said to have owned all the land that made up the Jewish quarter of the village. Oliphant writes that the rabbi had brought six Jewish families from Morocco to till the land and that they and another 12 Muslim families made up the whole of the village’s population at the time. The renewed modern-day village of Meron was founded in 1949 by a group of Orthodox Jews, former soldiers who served in the War of Independence. Although a relatively new development, Meron became famous for its vineyards. The high altitude, chalky soil and unique weather patterns make for high-quality grapes and, by extension, high-quality wine. The 10-km. Mount Meron trail is very popular among hikers.

There is an one-foot-high tower in the village that was constructed in the second century CE, which is still visible. In the last decade of the third century CE, a synagogue was erected in the village. Known as the Meron synagogue, it survived an earthquake in 306 CE, though excavations at the site indicate that it was severely damaged or destroyed by another earthquake in 409 CE.

As sleepy as the village may be, Meron has had its share of noise. On July 14, 2006, a Katyusha rocket fired from Lebanon landed in Meron, claiming the lives of Yehudit Itzkovich, 57, and her seven-year-old grandson Omer Pesachov, and injuring four others. Another barrage of rockets hit Meron the next day. There were no injuries.