As we approach Rosh Hashana, the Jewish New Year, we would like to thank all of you – the cherished supporters of United with Israel – for the amazing work we are doing together in defending the truth about Israel and sharing the miracles of Israel to millions around the world.

This past year has been a wonderful year of growth and success. As the world’s largest pro-Israel grassroots community, we have been fortunate to reach over five million followers on our Facebook page and more than seven million supporters in over 170 countries. 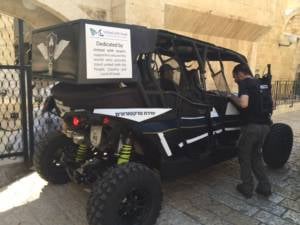 For the past several years we have been operating in English and Spanish only. During the past year, we launched our French department, which, we are happy to report, has been a great success.

Our goal for the upcoming year is to expand our platform to Russian, German, Portuguese and Arabic.

While our main focus is to defend the truth about Israel and fight anti-Israel media bias, BDS and online incitement, as well as to share Israel’s great success in benefiting the world in so many ways, we are also proud to have made a real difference on the ground.

This past year we donated to an elite volunteer police unit our second specialized anti-terror vehicle (ATV) that stops terrorists before they attack. Also included among the many charity projects that we support were thousands of fleece jackets, which were delivered to Israeli soldiers for the winter, and hundreds of holiday food packages for needy families across the country who count on our help. Another great success was reaching the milestone of 800,000 original signatures (from 168 countries) on the Jerusalem Declaration, supporting Jerusalem as the eternal, undivided capital of Israel. A hard-copy version was presented to dignitaries, including Prime Minister Benjamin Netanyahu, who told us that “it was most gratifying to see this tangible expression of support of our friends in 168 countries around the world.

“The people of Israel appreciate United with Israel’s advocacy, educational efforts and unflinching defense of the truth,” Netanyahu said.

The only factor limiting our continued growth and success is funding. United with Israel’s immediately fundable projects include expanding to other languages, launching local and campus advocacy initiatives, producing daily viral videos and creating on-the ground events around the world.

With the new year upon us, we need your support now, more than ever!

Yes, we dream big. But no bigger than the dream that built Israel in the first place!

We thank you so much for your past support and invite you to continue to help us grow and become part of our success in the coming year.

Once again, we are counting on you to help millions around the world stand United with the People, Country and Land of Israel!

We wish you and your loved ones a wonderful year of peace, prosperity, health and happiness.