“Ensuring security is our first common interest, but it’s certainly not the last,” Netanyahu stated in his address to the Ethiopian parliament on Thursday, during his historic four-day visit to Africa.

The first Israeli prime minister to set foot on the continent, Netanyahu’s goal is to strengthen cooperation with the African nations.

“Our two nations, and every country, are threatened by the forces of terror,” he stated in Ethiopia. “We’ve witnessed attacks in countries across the continent and around the world. We’ve seen fanatics who seek to impose a medieval barbarism on all humanity. They systematically murder innocent men, women and children, in malls, in universities, in cafes, in hotels. 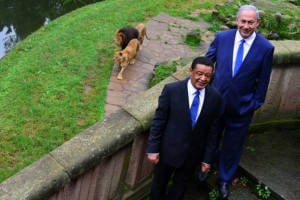 However, “ensuring security is our first common interest, but it’s certainly not the last,” he continued.

Pointing to Israeli expertise in several fields, particularly technology, he said: “This is the question I ask everywhere I go: Which cow produces more milk per cow in the world? You think it’s a Dutch cow; you think it’s a French cow. It’s not; it’s an Israeli cow and soon it could be an Ethiopian cow.

“This is my vision for our cooperation: to have Ethiopian farmers enjoy the benefits of Israeli know-how, working together with us; to have water channeled to every direction that you want and wasted very little; to have technology; to have communications, education, medicine. Enjoy the fruits of technology, because the future belongs to those who innovate.”

American-Israeli Bobby Brown, a founding member and resident of the city of Tekoa in Gush Etzion and former adviser to Netanyahu on Diaspora Affairs, commented on social media:

‘Netanyahu has Changed the World’

“What has Bibi just done? Prime Minister Netanyahu has just changed the world! He has united seven African Christian countries all threatened by Muslim extremists and formed an economic and military union with Israel. Thus advancing their economic interests, providing for their defensive needs and creating a united political front with Israel as their protector and ally! Only Israel answered their needs, only Israel cared. Each African country and Israel will benefit from this new union! Thank you for your visionary leadership, Mr. Prime Minister!”

In his address, Netanyahu also elaborated on the freedoms and opportunities enjoyed by Israelis of all ethnic and religious backgrounds.

“On the way here, I spoke to two young flight attendants of Ethiopian descent,” he said. “They are proud to be Israelis and they’re proud of their Ethiopian heritage.” Noting their excitement at visiting family in Ethiopia for the first time in several years, he also introduced “three outstanding members of our parliament who are also excited to be here, though they’ve been here before: Member of Knesset Avraham Neguise; former Member of Knesset Pnina Tamano-Shata; and our ambassador here in Addis Ababa, Belaynesh Zevadia.”

“Our Declaration of Independence guarantees the rights of citizens, regardless of religion, race or gender,” the Israeli prime minister explained, noting that “protecting the access of all in the Middle East to the freedom of faith is a great challenge. Israel today is the only country in the Middle East that fully guarantees the religious freedom for all – for Jews, for Muslims and Christians. You know that Christians are being slaughtered by ISIS and brutally repressed by the Iranian regime. In Israel, as in Ethiopia, Christians thrive, and I am proud that our Christians, the Christian community in both our countries are safe, secure and free. This is something we uphold for all religions – all religions – Muslims, Christians and Jews alike. It’s the values we should uphold everywhere in the Middle East and everywhere in the world – in Africa, in Europe, everywhere.”